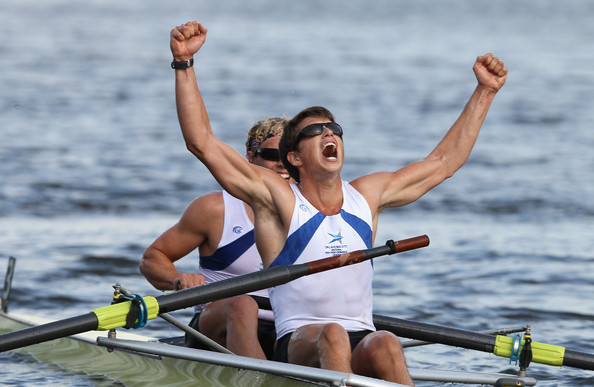 About seven years ago, my daughter did well on an erg test in middle school, and that’s when everything changed in the Miller family.

For those who don’t know what an “erg” is, it’s a barbaric instrument that inflicts a great deal of pain on people who are simulating rowing and trying to do it with power and speed for long periods of time.  It’s not uncommon for people to fall off ergs after tests, sometimes vomiting or passing out (consider the infamous Oxford-Cambridge race every year, seen above in 2013, which always features fit men falling backwards or sideways as they cross the finish line after 17 heated minutes of competition).  I’ll never forget my daughter telling me that she had blood running down her chin during one erg test because she was in so much pain that she bit her tongue, but didn’t dare stop.

My daughter’s successful experience with an erg machine in 8th grade resulted in her getting certified to scull, followed by seven years of rowing with her high school, club and college teams with varied results.  In some cases her boats won national and regional races, and in others they did poorly.  Crew is the ultimate team sport, though, so although individual stars occasionally emerge, boats are a combination of energies, personalities, power and grit, and doing well is always about everyone’s efforts.

One thing I noticed early on was that the 8 rowers and one coxswain in her high school boat often moved together in packs.  They ate together, relaxed together, commiserated and laughed together.  They needed each other as much out of the water as in the water, and whenever a disagreement arose among them, it was settled far more quickly than you often see among teen girls.

This all fascinated me.  I have always been a competitive athlete, mostly as a swimmer, but then became a martial artist while my children were growing up, and I wouldn’t classify either as a team sport.  Sure, I trained with others and enjoyed the camaraderie common to sports, including competitions, but after watching my daughter’s career and reflecting on the differences between what I’d always done and what she was doing, I decided to take the plunge and start rowing in my late 40’s.

Several years later I have gone to technique camps, flipped into the water while learning to scull, rowed both port and starboard, weathered calloused hands, shivered in 30 degree weather at 5:15 am on a dark river while doing “pause” drills, and even raced (we got last and had fun doing it).  Along the way, I’ve found that rowing has taught me lessons about life that are powerful, and different, from lessons in other areas of my life, and I wanted to pass them along for anyone who enjoys sports analogies as much as I do.

1.  If you want to succeed, consider helping others and being there for them, and not just yourself.  In swimming, if you don’t show up for a practice, or you are late, you hurt no one but yourself.  On the other hand, if you are expected to be at practice in crew and you don’t show up, the boat can’t go out and everyone’s day is compromised as a result.  There’s nothing more irritating than getting out of bed at 4:30 am, being on a cold, dark dock at 5:15 ready to row, and realizing that you can’t do what you expected to do because someone else didn’t show up.

2.  Strive for harmonious relationships with others if you want life to go well.  This should go without saying because Positive Psychology’s tagline is “other people matter,” but in rowing, it can mean the difference between winning and losing.  When everyone in a boat is “swinging” together, following the leader and taking orders from the coxswain, the boat goes fast – regardless of how much individual power is in the boat.  On the other hand, a boat of 8 powerful rowers who all do their own thing in terms of timing and effort will lose every time.

3.  Save your criticism for yourself.  At a technique camp in 2012 I heard a rowing coach expound on what happens when everyone in the boat is pointing their finger at others for a bad race, or even a bad practice.  Not only is it considered the height of rowing etiquette no-nos to coach others on what to do in the boat, it creates disruption and bad feelings.  This coach’s simple order to her rowers when they feel tempted to badmouth another rower: “Row your seat and not anyone else’s.”  Says it all.  What if everyone “rowed their seat” and kept finger-pointing out of the picture everywhere in life?

4.  Focus on doing the little things right before trying to get the big things right.  When you tackle a sport like rowing – or even swimming – especially at midlife, it’s not effective to try to race immediately or expect to be a good rower anytime soon.  Rowing is about getting the fundamentals right – catching the water at the right angle, going slowly down the slide, leaning out of the boat at the right angle, and even sitting up properly, just fo starters.  Once you do this, then power matters (this is where your erg scores matter), but many things in life include this principle of taking time to be precise and practiced in the little things if you want the big things to develop, too.

5.  Follow the leader.  In sweep rowing, all rowers face the coxswain with their backs to where they are heading.  This means that the coxswain is their eyes and ears – stray tree limbs, buoys and even other boats are potential obstacles – and everything he or she says about timing, pace and precision can dictate winning or losing.  The coxswain is also the person who does the talking during the race to tell you how the boat is doing compared to other teams, and when you have to dig deeper when you don’t think you have another ounce of strength left.  You can’t call your own race in these types of situations, and with one leader, everyone else has to be a good follower.  It also doesn’t hurt to thank the leader when the team does well – in the case of rowing, the coxswain is often tossed into the water with all of his or her clothes on.  Gratitude in all forms goes a long way.

Lessons in how to lead better and more fulfilling lives are everywhere, but I tend to find most of them in the sports pages and my own individual athletic pursuits.  Earl Warren, Chief Justice of the Supreme Court once noted, “I always turn to the sports pages first, which records people’s accomplishments.  The front page has nothing but man’s failures.” I couldn’t have said it better myself!

Previous PostPositive Psychology in the Workplace | Radio AM 790Next PostWhat’s Wrong With Middle-Aged Women – A New “Problem With No Name”?
crewgoalsgritleadershipresiliencerowingteamwork