Age hasn’t stopped these active adults, who range from 56 to 71 years young. In fact, some of them discovered or reignited their passions much later in life than one would expect. Here’s how their commitment to sports keeps them healthy. 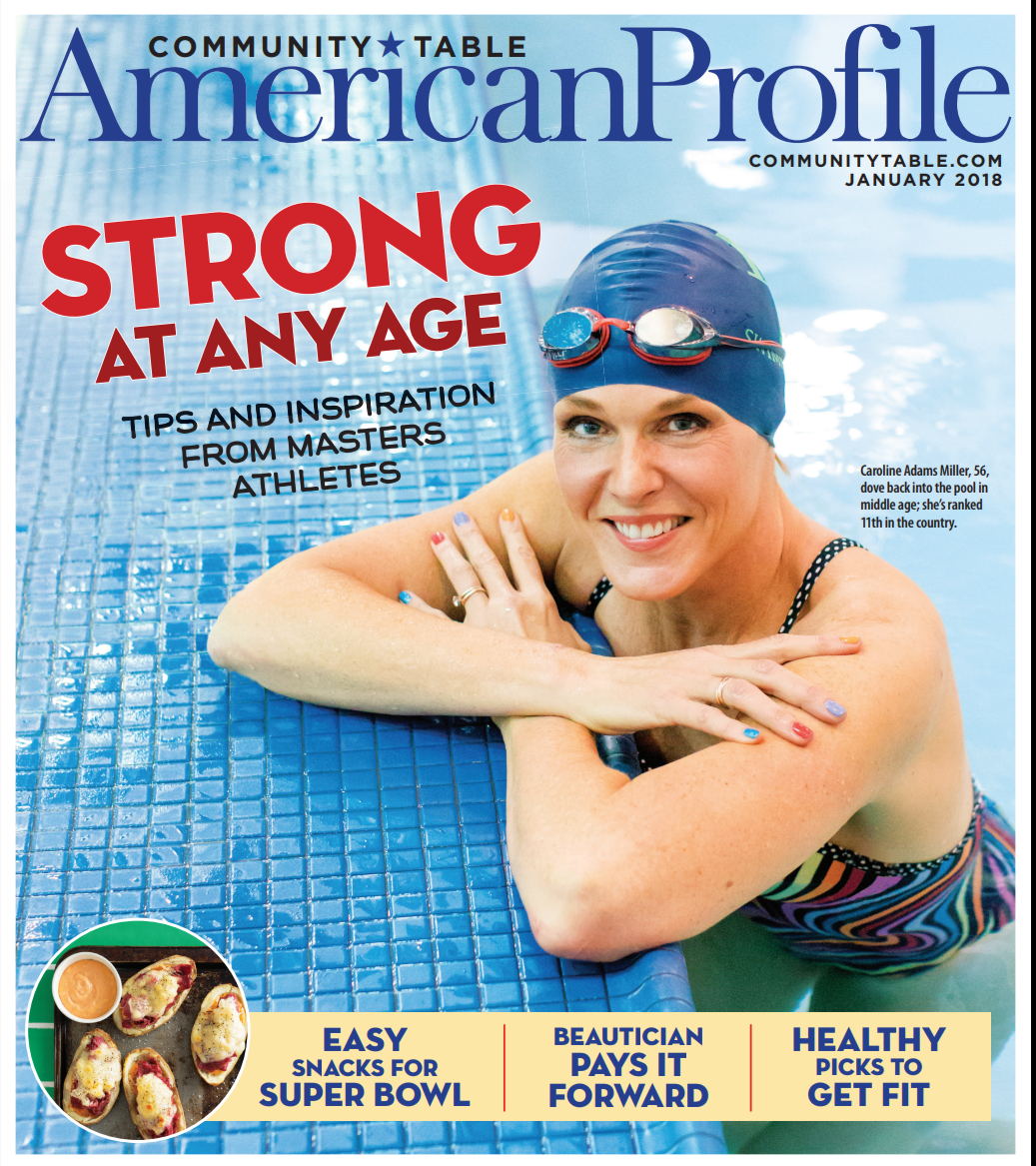 She Dove Back Into the Pool at Midlife

Once a competitive high school and college swimmer, Caroline Adams Miller, 56, spent 23 years out of the pool until 2003 when she dove back in with new—and even bigger—motivation.

“As a midlife athlete, I credit my personal reinvention story to what I call ‘getting grit,’” says Miller, a Bethesda, Maryland, life coach, motivational speaker and author of the book Getting Grit (2017, Sounds True).

For Miller, “grit” means perseverance toward her goals—a mentality she learned during her recovery from bulimia and something she pursues each day, both in and out of the water. As a young adult, she quit swimming due to her eating disorder, but as a final step in her recovery process, she returned to the sport to give it new, happier meaning. And now she’s eleventh in the country in the 55-59 age bracket. Miller, who also suffers from ADHD, says the pool serves as therapy.

“Swimming is one of the only sports that exhausts both the arms and legs and can calm the racing engine of a hyperactive person,” she says. “The quiet of the pool when you are swimming and submerged is akin to meditation, and you have to be alone with your thoughts.”

Several days a week, Miller wakes up at 4:15 a.m., heads to the pool at Washington, D.C.’s American University and dives in by 6 a.m.

“The early wake-up puts me outside my comfort zone and forces me to challenge myself to become my fastest, best self,” says the mom of three, ages 22, 25 and 28.

He Cycled Cross-Country at Age 71

Not even the toughest diagnosis could keep Chuck Wakefield, 71, off his bike. The Grapevine, Texas, resident recently rode 3,400 miles across the U.S. to raise awareness for multiple myeloma, a bone marrow cancer he has battled for 14 years.

The ride, sponsored by Janssen Oncology to support research through the Multiple Myeloma Research Foundation (MMRF), brought in $400,000 for the cause.

The demands of long-distance biking—even the 100 degree-plus temperatures he experienced in the Mojave Desert during his cross-country journey—have long appealed to Wakefield, a retired dentist, who completed his first 100-mile ride in the early 1970s when he was in his 20s.

“It gives you cardiovascular fitness and helps me maintain my weight,” says Wakefield, who served in the U.S. Army and has lived all over the world.

But the sport is more than a fun way to exercise. Wakefield gets social interaction from his buddies in his local cycling club.

“I’m not the racer I used to be, but I can hang out with the faster groups because I work at it,” he says.

That determination has served Wakefield well, despite a post-diagnosis eight-month course of chemotherapy followed by a grueling bone marrow transplant. Today, he is still in treatment—a four-hour infusion of chemo twice a year and oral chemo three weeks out of the month—but, to him, it’s just a part of life.

“I don’t make a big deal out of my diagnosis,” he says. “There are side effects to all of the drugs, but I feel fortunate. My glass is 99.9 percent full.”

And though Wakefield isn’t likely to ride coast-to-coast anytime soon, he is eyeing some other challenging routes.

“The MMRF is planning a three-day ride from London to Paris,” he says. “That sounds like something I’d really love to do.”

He Shoots Hoops All Over the World

Jim Sweeney, who has spent his entire life playing basketball, still hits the court three times a week—but admits that at age 60, he’s slowed down a bit.

“It’s what I do for exercising and socializing,” says Sweeney, a sports cartoonist who calls his discovery of the Federation of International Maxibasketball Association, or FIMBA, a lifesaver. The global senior sports league starts at age 35 for men.

This isn’t just some Saturday pickup league. Sweeney has competed in tournaments all over the world—from Italy and Greece to Costa Rica, Croatia and New Zealand. “You get to meet people who would otherwise never cross your path in life,” he says. “I’ve even traveled to places like Ukraine and Moldova to visit and play with basketball friends I’ve made at the FIMBA tournaments.”

“Preparing for these events forces you to remain physically and mentally fit,” says the Clearwater, Fla., resident who was appointed head of FIMBA’s U.S. efforts last summer. “You shed pounds, sleep better and have a sense of accomplishment not just when you’re training, but when you compete.”

Sweeney, who has been married for 35 years and has a daughter, says the health benefits aren’t the only things that keep him in the game—the camaraderie of the team is a major motivator, too.

“Overall, the game keeps you strong and makes you feel younger,” Sweeney says. “You can’t put a price tag on that!”

She Races BMX Bikes With the Best of Them

Kittie Weston-Knauer, 69, has struggled with osteoarthritis since she was in her 20s. But her painful joints never stopped the Des Moines, Iowa, mom and grandmother from staying active.

Growing up with five brothers, one sister and an attitude that “anything they could do, I could do better,” Weston-Knauer became an avid cyclist at age 10 when she received her first bike. As a middle school teacher, she commuted to work by bike for eight years. But it wasn’t until her 40s that she discovered a passion for BMX racing, thanks to her son.

“As a family, we were going to all of his races,” she recalls. “I didn’t know squat about the sport, but I remember my son said, ‘If you think it’s so easy, try it!’”

Never one to shy away from a challenge, Weston-Knauer borrowed her son’s bike. “I quickly realized this wasn’t like street or bike path biking,” she says. “I was hooked on the thrill, the exhilaration.”

The mom of two finished her first race at age 40, the only mom on the track. Now, she reigns as the oldest female BMX competitor in the country—even after having both her hips and knees replaced within a year.

“I love it,” she says. “Every time I get on my bike, I win, no matter where I place. To me, BMX is all about the joy and the freedom of expression. It’s knowing that every time I’m out there I’m having a good time.”

LESSONS FROM THE MASTERS

The secrets to staying fit from these young-at-heart athletes.

JOIN A TEAM. Start at your local YMCA or community center. The socializing keeps you fit mentally, says Jim Sweeney.

TRY SOMETHING NEW. Kittie Weston-Knauer first jumped on a BMX bike when she turned 40 and now consistently wins her age group in races.

KNOW WHEN TO TAKE A BREAK. “A break could mean I’ll walk the dog instead of doing laps,” swimmer Caroline Adams Miller says. “A break could also mean getting in the gym to lift weights, but I’ve learned you don’t always have to push yourself.”

MAKE EXERCISE A PART OF YOUR LIFE. Chuck Wakefield always keeps his bicycle parked in his living room—where he can see it—never in the garage.