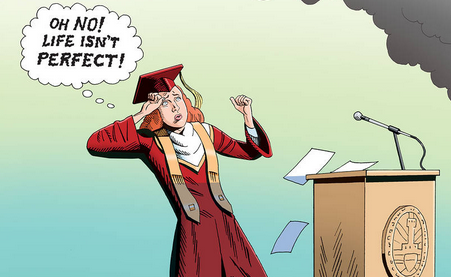 Instead of more gun laws and mental health diagnoses, how about cultivating more grit?

The latest school shooting tragedy, this time in Oregon, has got me wondering if we have more than just a gun problem, or a mental illness problem, as news pundits, experts and legislators have been saying.

What if our problem is that we’ve coddled a generation of young adults to be so sensitive to “trigger warnings” and keeping them safe from harm that they cannot handle rejection, hardship, failure and discomfort without lashing out violently?  What if this bubble wrapped generation is going crazy because of their emotional fragility, and not necessarily because we aren’t catching mental illness early enough, or we’re making too many guns too easy to get?

I’ll illustrate my thoughts with three stories, which have all bothered me for a long time, and that underscore why I think lack of grit might be at the root of our challenges:

What’s wrong with this picture?  Everything.  And I think it goes to the heart of what’s happening in our anguish about guns and how simmering resentments over all kinds are causing blood to be spilled.

What if the biggest problem is simply that we are churning out weak, self-involved, lazy whiners who need to hire cuddlers to hold them for an hour when they can’t soothe themselves, and who can’t handle rejection, spilled hot coffee or hurt without calling a lawyer?

It’s been well-researched and documented that the self-esteem parenting movement did nothing but foster narcissists who believe they are entitled to trophies and praise for simply participating in life and activities.  It has left them fatter, slower and more anxious than previous generations, and their neuroses and fragility have given birth to the term “microaggression.” Microaggression is what they say occurs when they have to sit through book discussions that contain words and concepts they disagree with, they hear a racial nuance that disturbs them, or someone enters their environment that causes perceived “hostility,” thus making them vulnerable to be “triggered.”

Reports about the latest shooter note that he was rejected by women online and in person.  He may have had other underlying problems, but interpersonal challenges are thought to have been the “trigger” that caused him to erupt in violent rage, much like the gunman at the University of California at Santa Barbara last year, who had the same complaints about women and their unwelcome treatment of his advances.

Perhaps we need to overhaul our parenting, our culture, our schools and our standards for resilience before we get wrapped up in another debate about gun laws and inadequate mental health facilities.  What if the biggest problem is simply that we are churning out weak, self-involved, lazy whiners who need to hire cuddlers to hold them for an hour when they can’t soothe themselves, and who can’t handle rejection, spilled hot coffee or hurt without calling a lawyer?

I’m currently learning the martial art of Tzee Wai Kuen, known as the “mother of all self-defense” because of its emphasis on the fundamentals of handling your body with mindfulness.  The primary tenet is about eye contact, especially when facing aggression.  Instead of running, we’re instructed to lock eyes, move closer, and then disable the threat.  Resisting or running away from the attacker is a guaranteed loss, as is the inability to lock eyes with your foe.

Perhaps we need to overhaul our parenting, our culture, our schools and our standards for resilience before we get wrapped up in another debate about gun laws and inadequate mental health facilities.

Let’s take a look at whether or not we are teaching our students, children and employees to face hard truths and lock eyes with aggressors to develop strength and coping skills, or if we are actually perpetuating weakness and needless “trigger happy” aggression by teaching them that the world is a scary place of dangerous ideas and unnecessary mastery experiences that are better off avoided by doing things like making all playground equipment rounded plastic, banning tag and sledding, and telling them they are winners for doing nothing.

Maybe our problems are that basic and our national agenda should be about getting some grit, not about removing more threats.