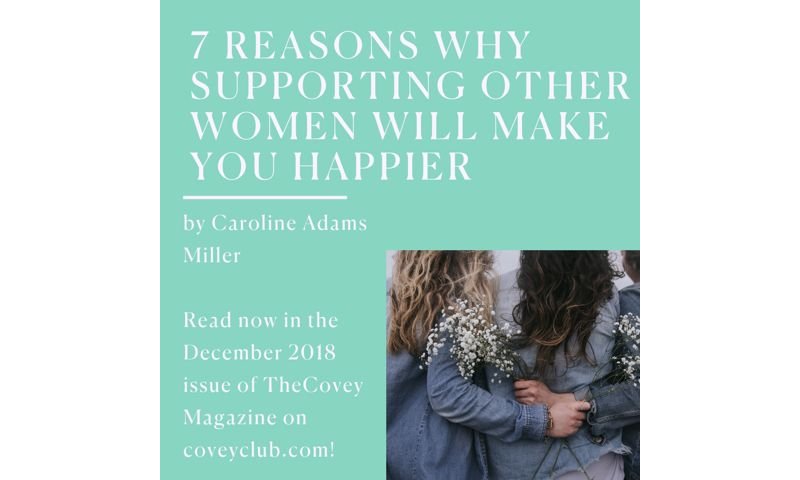 The science of flourishing shows we get a hormonal boost from boosting other women’s accomplishments.

By Caroline Adams Miller, published in The CoveybClub, December 2018

I was in the second day of a three-day workshop for academic leaders, many of them women, when the urgent notes starting piling up on my table during breaks. I was buttonholed on elevators and whispered to over coffee with the same question over and over: “When are you going to go back to the topic you raised during the first day — about how women kneecapping other women is a problem we need to talk about more openly?”

In the era of #metoo and #timesup, I’ve occasionally been chided for reviving the “mean girl” conversation that some women feel lets men off the hook for their abusive behavior and unfairly focuses on the stereotype of petty catfights. Some also think that talking about this subject risks taking the spotlight off the extraordinary political gains of women in the recent midterm elections, which some people believe demonstrates the solidarity of women toward other women’s goals across the board.

But even as serial predators like Dr. Larry Nasser (the chiropractor who molested hundreds of female gymnasts and young women for decades) and Bill Cosby (the comedian who drugged and raped an untold number of unwilling female victims) are brought to well-deserved justice, I’m finding that women want and need to talk about how not supporting — and actively bullying — other women is part of what is keeping women from being successful. This is a “both/and” moment.

How Not Supporting Other Women Holds You Back

In fact, in 30 years of writing and speaking to audiences around the world, the only question that has ever resulted in a 100 percent show of hands is: “Do you think that women undermining other women is a problem that holds us back?”

I began to focus on this issue more earnestly when the women’s movement roared back into focus after the election of Donald Trump. His misogyny and abusive treatment of women coincided with research finding that women are not just stagnant but they are going backwards in terms of economic parity, and female CEOs in the Fortune 500 have dropped to a low of 5 percent. It also came at a time when I was invited to a Harvard-Yale women’s salon in the Washington, DC, area, where the topic of women hurting other women generated a frenzied reaction of sold-out tickets and requests for video feeds.

As a woman, I’m familiar with how often we are told that the problems holding us back are the result of something we are not doing: Are we leaning in enough? Dressing appropriately? Building the right network? Finding the best fairy godmentor? Attending the right conferences to “link in” to our advantage? Giving and taking correctly? Enrolling in enough micro-courses to stand out from others? Building enough humility to be a “good to great” leader?

But a recent article in The Atlantic magazine challenged one of the most common criticisms made of women of late — that they lack confidence and a willingness to take risks — and reinforced that it’s what we do to each other that is the bigger problem. Research finds that women often fail to speak up, lean in, articulate their accomplishments, and ask for more because of a “backlash effect.” The backlash is multifaceted: confident women are seen as pushy and not empathic enough, and self-promotion is linked to such unpleasant characteristics as bossiness and aggression. And women often snipe at and damage the careers of women they see as competitors because of “scarcity theory,” believing that any woman who succeeds will be a threat to their own security.

For the researcher Meghan I. H. Lindeman, the implications are clear: Without any changes to women’s fear of backlash, “they are unlikely to successfully self-promote, no matter how confident they feel,” she says.

Why We Cultivate “Frenemies”

Although many women can point to other women who have guided them, encouraged them, pushed them forward, and been proud of their accomplishments, what many are more familiar with is the pervasiveness of “frenemies” — friends who are actually enemies — people whom a Self Magazine-Today Show poll found that 84 percent of women admit to having in their lives. These women aren’t always open antagonists, but if they go silent, change the subject, or fail to acknowledge and share your good news, their reactions are as emotionally damaging as being openly attacked.

I have witnessed and been the victim of female bullies at all stages of my life. But as a graduate of the University of Pennsylvania with a master’s degree in Applied Positive Psychology, it’s my mission to “apply” research from the science of flourishing to help change negative conditions in our lives. So instead of just looking away from this topic, I’ve come up with a solution that I believe works for everyone who wants to support the success and goals of other women, and the good news is that it will make you happier to adopt this simple habit: Whenever you hear about another woman’s success with her own goal — something she has worked hard to achieve and that is meaningful to her — automatically share it on two social media networks with #share222, and then do it again every week.

Steps for Flourishing in Your Life by Helping Others Flourish

Why will this work if we build this habit, and why will it make us happier? The research from Positive Psychology on flourishing reveals a number of important reasons why supporting other women’s success will be a boon to our own emotions: